Fact Sheet: The Public Pensions Crisis in the U.S. 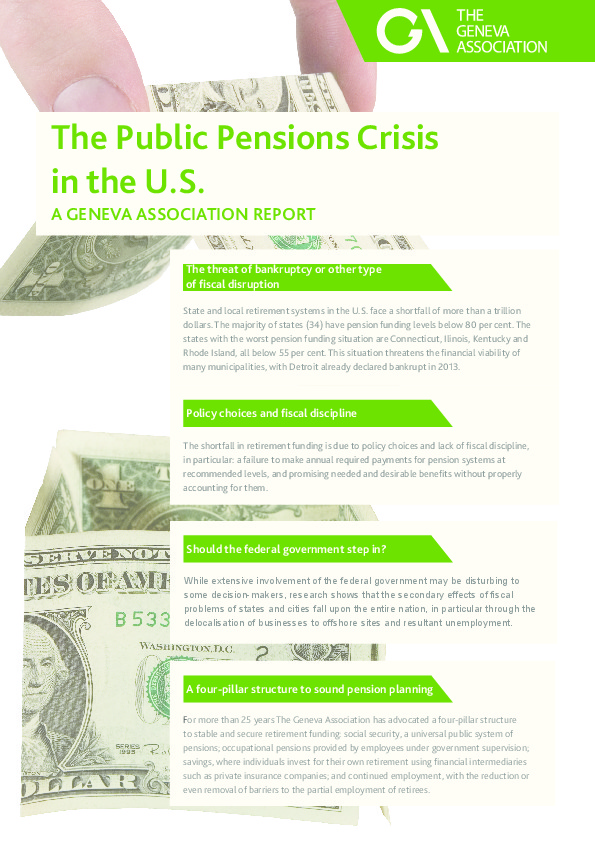 The threat of bankruptcy or other type of fiscal disruption

State and local retirement systems in the U.S. face a shortfall of more than a trillion dollars. The majority of states (34) have pension funding levels below 80 per cent. The states with the worst pension funding situation are  Connecticut, Ilinois, Kentucky and Rhode Island, all below 55 per cent. This situation threatens the financial viability of many municipalities, with Detroit already declared bankrupt in 2013.

The shortfall in retirement funding is due to policy choices and lack of fiscal discipline, in particular: a failure to make annual required payments for pension systems at recommended levels, and promising needed and desirable benefits without properly accounting for them.

Should the federal government step in?

While extensive involvement of the federal government may be disturbing to some decision-makers, research shows that the secondary effects of fiscal problems of states and cities fall upon the entire nation, in particular through the delocalisation of businesses to offshore sites and resultant unemployment.

Ability to interpret algorithmic outcomes is critical for assessing the performance of #AI systems, for their conti… https://t.co/MOWAqctpSn

Intelligent systems excel in detecting patterns and correlations in complex #data, which is particularly useful in… https://t.co/B1fP4HrdPt

Next call for papers deadline for The Geneva Papers is for a special issue on Trust in #Insurance - submissions due… https://t.co/8QAMpK3886

So much opportunity for #AI in the #insurance and financial sector. Looking forward to launching our new report, Pr… https://t.co/GP7hhAHM6R

Summary of #GAGlobalAgeing19 now available! Conference explored the role of #insurers in managing longevity and… https://t.co/1IFasyTqgv

Accepting papers for a special issue of The Geneva Papers on #Trust in #Insurance. Submissions due 26 April 2020!… https://t.co/vzAPEVwY9i

#COP25 discussions reinforce that #resilient infrastructure is critical for countries to adapt to #climatechange. I… https://t.co/KbvjQCbWhR

"As we continue to push for greater #diversity in our industry, it is imperative that we recognize the… https://t.co/7sesWR5kyp

We can't wait to tell you about the new GA Women in Insurance Award #GAWIA How's it different? #1 it's for… https://t.co/pXVEE5nBkF

3-part stakeholder roadmap in our latest report starts with #insurers and their #intermediaries. By 'borrowing' tru… https://t.co/d4zKeN3EBL

Some concrete examples of how #data and #newtechnology are helping #insurers improve lives and narrow… https://t.co/kr2tw116On