Insurance and Finance Newsletter Special Issue on Mergers and Acquisitions

Special Issue 2016 of the Insurance and Finance Newsletter 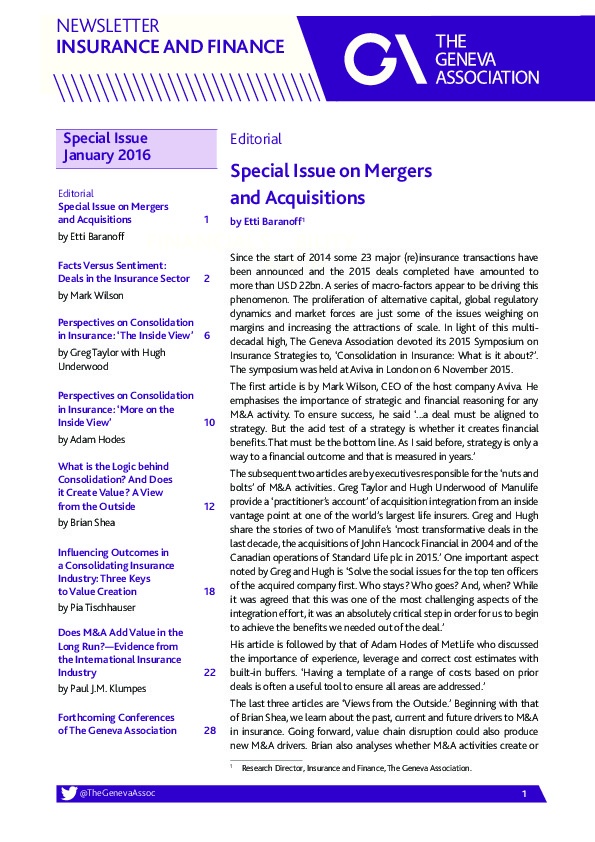 Editorial Special Issue on Mergers and Acquisitions by Etti Baranoff

Since the start of 2014 some 23 major (re)insurance transactions have been announced and the 2015 deals completed have amounted to more than USD 22bn. A series of macro-factors appear to be driving this phenomenon. The proliferation of alternative capital, global regulatory dynamics and market forces are just some of the issues weighing on margins and increasing the attractions of scale. In light of this multi- decadal high, The Geneva Association devoted its 2015 Symposium on Insurance Strategies to Consolidation in Insurance: What is it about? The symposium was held at Aviva in London on 6 November 2015.

Facts Versus Sentiment: Deals in the Insurance Sector

The Evolving Liability Conference is an annual conference on themes and developments in liability law, litigation and underwriting and the ...

Digital Entrepreneurship and the Supportive Role of Insurance | Webinar

The annual Health & Ageing Conference discusses the role of the life and health insurance industry in addressing issues related to ageing ...