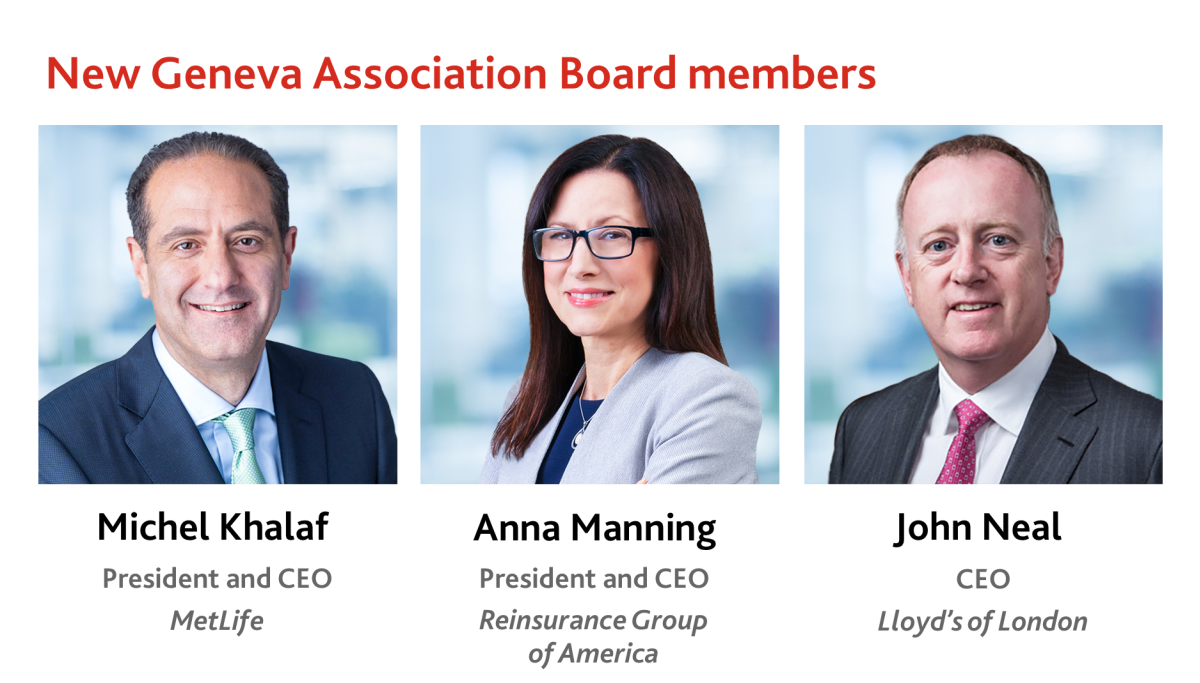 The Geneva Association is pleased to announce the elections of three new Board members:

Michel Khalaf commented: “What we do as an industry forms a vital part of the social safety net and provides financial security for people across the world. In these challenging times, The Geneva Association will play a key role in shaping the conversation around risk, regulation and the future of insurance. I am honoured to join its Board of Directors.” Michel Khalaf has been President and CEO of MetLife and a Geneva Association member since May 2019.

Anna Manning added: “As insurers and reinsurers, we strive to protect people and businesses during their most challenging times. The sheer scale of COVID-19 has made abundantly clear the responsibility and purpose of the insurance industry. The Geneva Association’s work to highlight insurance’s contributions to societal resilience is therefore more important than ever, and it is an honour to be a part of it.” Anna Manning joined RGA in 2007, became President in 2015 and the CEO in 2017. She has been a Geneva Association member since 2017.

John Neal remarked: “The Geneva Association is unique among think tanks for its deep understanding of the insurance industry, enabled by regular, meaningful interactions with its insurance CEO members. I look forward to helping guide the organisation’s ambitious research agenda on global risks, so that we can really impact society.” John Neal was appointed the CEO of Lloyd’s of London in October 2018 and has been a Geneva Association member since 2013.

The appointments of Michel Khalaf, Anna Manning and John Neal to the Geneva Association Board of Directors took effect 10 June 2020.

Press release: IoT data is the risk prevention tool of the future in insurance

Is #P2Pinsurance a viable alternative to traditional insurance plans or a short-lived trend? This #RiskPaper examin… https://t.co/OnXFC2Akl8

Our study arrives at 5 themes underpinning the role of insurance in the future risk landscape: 1️⃣ Protection gaps… https://t.co/NLEw3IJ2OG

RT @ProfJarz: Delighted to be among a cadre of great risk professionals interviewed in this thought-provoking report on the role… https://t.co/5suI3qDVuW

Our survey reveals that insurance customers are cognisant of evolving risks, but this is not necessarily leading to… https://t.co/rhNzCGvXOC

What was the experience of #insurance customers during the #pandemic? Our global survey found that 70–97% of small… https://t.co/SRXD54qV0g

Our projection of the post-COVID-19 #RiskLandscape reveals 4 shifts with the biggest implications for insurers, in… https://t.co/UXtPhn0kZy

As societies begin to emerge from the #pandemic, it is important for insurers to understand which pandemic trends w… https://t.co/orp7iwFu82

What can insurers do to address the drivers and impacts of #EnvironmentalRisks? The 2nd panel in #GAEnvironConf21 w… https://t.co/1QKUYq9bRu

The first session in #GAEnvironConf21 will focus on how the #EnvironmentalRisk landscape is changing and what this… https://t.co/yxP5JnN72w

The recording of last week's New Technologies & Data Conference is now available! Learn how #IoT can be used to ke… https://t.co/CoEkREaS1y

RT @InsDevForum: Gain a unique perspective on everything from climate-resilient investments to inclusive insurance at the IDF Summit… https://t.co/9vGgn3ye8b

#WorldEnvironmentDay2021 reminds us that collective action must be urgently applied to protect & restore our planet… https://t.co/WmCgYoFvNf